On Saturday 21 November, the passing of Prof. Oliver Friggieri was announced. The news literally shook the island and social media was flooded with tributes to him. Prof. Friggieri, who died at the age of 73 years, will live on through his work and will be remembered as an author, literary critic, educator, philosopher, colleague and friend to many that have crossed his path.

Prof. Friggieri is considered a Maltese literature giant and will be always remembered as one of the most respected authors of the twentieth century as well as one of the main literary critics of Maltese literature. Prof. Friggieri was the author of a large number of books published in Malta and abroad in several languages, with more than 250 published critical studies in books and academic journals and presented his research in several international congresses. Prof. Friggieri organised the first-ever national congress on Maltese culture in 1989. Friggieri wrote the first Oratorio in Maltese in 1985 as well as the first cantata in Maltese in 1989. He also acted as a valuable contributor in various newspapers and academic journals.

In 2008, Klabb Kotba Maltin published the first edition of Friggieri’s autobiography “Fjuri Li Ma Jinxfux”: 800 pages of accounts and memories covering the period 1955-1990. It narrates numerous personal and family experiences as well as political events and encounters, together with the author’s perspective and experience of the transformation of Malta from a colonial state to a more liberal one following the Second World War.

Prof. Friggieri’s admiration for the Maltese national poet Dun Karm Psaila is also evident through his in-depth knowledge and studies on the author’s literary works. Both Friggieri and Dun Karm Psaila expressed unconditional love for their mother country and their mother tongue, and both did their utmost to promote the Maltese language among the Maltese people and abroad. Most of Friggieri’s University students surely recall his study unit on Dun Karm’s poem “Il-Jien u lil hinn Minnu”.

Prof. Friggieri has a strong connection with literary translation. He has translated prominent literary works from Latin, Italian and English including Orazio’s “De Arte Poetica”, the classical tragedies of Sophocles and Euripides, theatrical works such as Karol Wojtyla’s “The Jeweler’s Shop” and narrative works such as Francis Ebejer’s “In the Eye of the Sun” and Ciril Kosmač’s “A day in Spring”.

Prof. Friggieri’s novels and short stories have also been translated into 16 languages: English, Russian, Finnish, Arabic, Italian, French, Macedonian, Hungarian, Romanian, and Greek. Some of his works were adapted to stage and television and some of his poems were included in important poetry recital events around Europe. 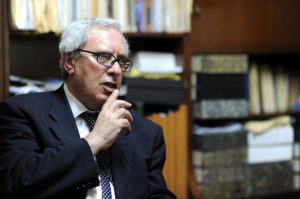 His Contribution in Associations and Published Journals

Prof. Friggieri was the co-founder of Il-Moviment Qawmien Letterarju, and also contributed as an editor to the journal “Il-Polz” (1969-1973). He was also co-founder of the journal “Sagħtar”, that was distributed monthly in all primary and secondary state schools in the 90s. In 1971, he worked closely with Mr Pawlu Mizzi for the establishment of the publishing house Klabb Kotba Maltin. He served as editor of the “Journal of Maltese Studies” for a number of years and he was also a member of the Association Internationale des critiques littéraires.

His roles at the University of Malta

In 1976, Friggieri started lecturing in the Department of Maltese of the University of Malta and served as Head of the Maltese Department between 1988 and 2004. His relationship with his students and his colleagues in academia was one of a kind. Behind a very intelligent author and philosopher lay a gentleman who was always available when any of his students or colleagues needed a helping hand. Prof. Friggieri believed in his students as he knew these generations of young people would frame the future of Malta. In fact, he was the one who handed L-Għaqda tal-Malti – Università to the first University Student elected as President of the same student organization. He believed that L-Għaqda tal-Malti – Università should truly belong to University students. He was always keen to receive university students in his office and share with them his knowledge and his advice and his published works.

His memory will always live on among all those that have crossed his path at some point or another in their lives and these people truly believe that it has been a privilege for them to share even just a few seconds of their life with this great gentleman.

Dear Prof. Friggieri, we would like to take this opportunity to thank you not only for your contribution to the promotion of the Maltese language and literature but also for your generosity and your humbleness. You were truly a great mind who was aware of the great responsibility you had towards society and future generations.