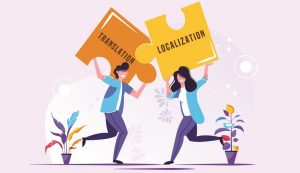 What’s The Difference Between Localization & Translation?

Some people use the terms ‘translation’ and ‘localization’ interchangeably, but they’re not the same things. There are fundamental differences between the two. Knowing them means you will be able to communicate with your audiences more effectively.

Translation is the process of changing text from one language to another, achieving an equivalent meaning while respecting grammar rules and syntax. It is not necessarily a word-for-word rendering; it is about maintaining the intent and concepts. Translations are often used to write scientific journals, medical documents, user manuals, training manuals and technical publications.

On the other hand, localization is a more comprehensive and complex process designed to adapt a message to local audiences, ensuring a translation is linguistically and culturally accurate to the region where it will be distributed. It adapts the material to specific audiences and is widely used for video games, websites, software and mobile apps.

Here is a straightforward example to explain the difference between translation and localization. American and British English are both English, and so a translation would never be needed. However, a British company operating in the USA would need to localize a website for its American audience because there are significant differences between the languages:

There are different spellings: ‘s’ becomes ‘z’ as in ‘localise’ to ‘localize’ and ‘organisation to ‘organization.’ Also ‘ou’ becomes ‘o’ as in ‘glamour’ to ‘glamor’ and ‘colour’ to ‘color.’

Some words are entirely different: ‘Lift, car boot and rubbish’ in UK English become respectively ‘Elevator, trunk and garbage’ in US English.

If you want to do business in several international markets, a regular translation will probably not be good enough. You need to localize your content to fit in with local traditions and beliefs. Doing so will gain the trust of your prospective customers.

How important is localization? Around three-quarters of internet users prefer to read product information in their native language and most online shoppers say they are likely to purchase again from a company if the aftersales care is in their language.

Localization includes translation but also many other factors such as colors, layout, visuals and currencies. To provide a better user experience, you need to consider:

Units of measurement: Many countries operate the metric system, so if your content uses imperial it will have to be converted.

Visuals: Photos will have to be adapted to local cultures. For example, you should not use images of bacon in countries where eating pork is taboo.

Colors: These can mean different things to different people. For example, blue means trust and security in North America and Europe and immortality in Eastern cultures. In Western cultures, green is associated with luck and freshness, while in Indonesia, it is forbidden. 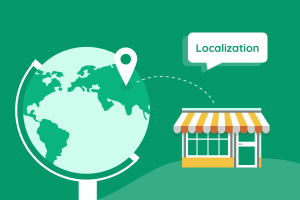 Key Differences Between Localization and Translation

Here is a summary of two principal differences between localization and translations:

1) Translation focuses more on the language and conveying the meaning in the target languages.

Localization adapts the message to meet linguistic, functional, and cultural requirements and expectations.

2) Translations are neutral when it comes to cultural differences, concentrating solely on the language part.

Localization recognises that audience needs vary depending on where they live. The differences are either cultural or functional. The former can be applied to social codes, visuals, shapes, icons, graphics and colors, while the latter can refer to addresses, dates and time formats.

Both localization and translations play essential roles in increasing the reach of language. However, if you genuinely want to resonate with your target audiences when converting your content into another culture or language, the most appropriate way is with localization.